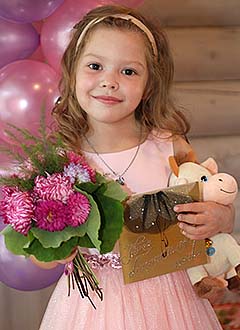 Six-year-old Onega Polina from Krasnoufimsk, Sverdlovsk region, could hardly hear since the day she was born. Doctors have found a cholesteatoma tumor in the middle ear of her right ear canal, which is constantly growing and destroying tissue connections and any hope for her recuperation. The US clinic is prepared to remove the tumor and restore her hearing because such surgeries are not yet available in Russia. But they cost a lot of money. The girl’s parents cannot afford the costs.

The girl was named Onega because her father really liked the sound of the city Onega in Arkhangelsk region.

“When I saw my daughter for the first time, I saw that she barely had any ears,” says Olga, Onega’s mother. “There was only a poorly developed earlobe, and a small skin spindle. But I was so happy that I immediately thought it was just a cosmetic defect. It was nothing we couldn’t handle. Little did I know about the challenges we would have to endure.”

The audio screening results that are performed on all newborns in birthing homes showed that the little girl was deaf. When the girl was discharged, her parents were advised to see an audiologist. Onega was diagnosed with “bilateral conductive hearing loss.” Due to the fact that the child’s left auditory canal was completely shut closed while the right one was too narrow, the sound could only reach the middle ear through the skull bone. When Onega was 1 year and 8 months old, she finally received her first bone conduction hearing aid.

“Nobody ever mentioned the hearing restoration surgery at the time,” says Olga. The parents tried their best to help their daughter. The took her to special development sessions. Onega began to slowly develop her speech. At the time, they were still looking for doctors who would undertake the hearing recovery surgery. One day, when Olga was watching the ‘Channel One’, she saw the story of Ivan Primak, who was under Rusfond’s supervision with the same diagnosis, and his surgery in the US was funded by charitable donations. Olga decided to contact the California Ear Institute. Being an English Language teacher, she did not require an interpreter to speak to Dr. Joseph Roberson.

“The doctor advised us to get a CT scan and an audiogram. We then sent the results to the clinic,” explains Olga. “We discovered another serious issue: the doctors found a cholesteatoma tumor in her middle ear, which was critical to remove as soon as possible. Otherwise it would continue to grow and destroy the neighboring tissues.

The Polina family has already managed to cover a portion of the surgery cost through charitable donations.  But they still need more money. According to the American doctors, chances of restoring her hearing are high, but in order to take advantage of this opportunity, they still need $85,000. The girl’s parents are unable to collect this much money by themselves.

The cost of Onega's treatment is 85,000 USD. We are happy to report that Rusfond has raised the entire amount needed. However, an additional 9,750 USD may be required for her and her mother's flights, accommodations, food, local transportation, and other associated expenses for the duration of their stay in the USA. Dear friends, if you decide to help Onega Polina, please don’t feel intimidated by the price. All donations will be accepted with equal gratitude. You can contribute to Rusfond USA using PayPal or by sending a check made payable to Rusfond USA and mailing it to Rusfond USA, 420 Lexington Avenue, Suite 300, New York, NY 10170. Thank you! All donations in excess of what is needed for Onega will help other children in need of ear surgery.

California Ear Institute Otolaryngologist Joseph Roberson, M.D. (Palo Alto, California, USA): “When we studied the results of the CT scans and other medical documentation, we’ve come to the conclusion that we can fully restore Onega’s hearing over the course of two stages of surgical treatment. First, we will remove the cholesteatoma in her right ear. Then, after a rehabilitation period, we will perform a complex surgery in her left ear by recreating the auditory canal and eardrum, and then implant an auditory cavity. The girl will finally be able to hear and hence lead a normal healthy life.