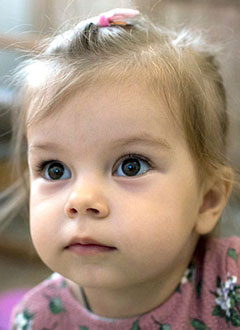 Yesia is our first and long-awaited child. Developmentally she isn’t lagging compared to other kids her age, but outwardly she’s much different from them. Our daughter was born with abnormalities: on her right hand she has three fused fingers, and her right foot twists out because the fibula is underdeveloped. Immediately after getting discharged, we started looking for a hospital where Yesia could be helped. We applied to the Scientific and Practical Centre of Medical and Social Expertise, Prosthetics and Rehabilitation named after G.A. Albrecht in Saint Petersburg. At five months of age, doctors operated on Yesia. They separated the fingers of her hand and formed a pinching grasp. Thanks to the surgery, our daughter is now able to grip toys. However, holding onto them is another story. Then they began to work on her leg. Doctors tried to align the foot: they put a cast on it, operated, but all in vain. The foot still twists to the side. With each passing day the difference in the length of her legs grows - now it has reached three centimeters. Deformity in the knee joint has started. In a few years, if no action is taken now, our daughter will not be able to walk on her own. It’s necessary to surgically stabilize the ankle, but in our country, such an operation can only be done after Yesia is 12 years old, when the skeleton is formed. At age three, you can start to lengthen the fibula, but without surgery it will still will twist out. Our daughter will not be able to stand on her right foot. The situation seemed hopeless. And suddenly we saw a news program on "Channel One," a story about Lera Gaivoronskaya. That’s how we learned about the American orthopedic surgeon Dr. Dror Paley. He developed his own method to treat such defects and has helped many patients. This spring, we were able to see Dr. Paley for a consultation. He believes that Yesia needs surgery right now, otherwise by adolescence the difference in leg length will reach ten centimeters. The bill for the operation is enormous. We have nothing to sell except our apartment, but even this is not enough, and we will be on the street. Yesia walks in special shoes, wears a prosthesis for support. If she’s not helped now, my daughter will be disabled for the rest of her life. I beg you, help me!

Orthopedic surgeon, Dr. Dror Paley of St. Mary’s Hospital in West Palm Beach, Florida says: "We can help the girl without waiting for her to reach adolescence. We will first perform reconstructive surgery on her right foot and lower leg - we will bring them into the correct position with the help of a special orthopedic device called an external fixator. We will shorten the tibia and place an external fixator on her leg to lengthen the fibula. Over the course of five months we will stretch and stabilize the fibula, then remove the external fixator and place the leg in a cast for one month. We will then remove the cast and the fixating spokes. The procedures used to remove the external fixator and spokes produce less trauma to the child. Afterwards Yesenia will have physical therapy to complete her treatment.

This method is not used in Russia or Europe. Conventional treatment includes multiple surgeries and a long process to stretch the patient's bones (at the age of 12-14). Based on our treatment, Yesenia’s right leg will be straight and level; she will be able to move around just as well as other children her age.

We also will correct the thumb of her right hand - right now the range of its motion is 90 degrees. For a normal grasp the angle should be 135."