An American Hospital Will Admit Nastya Kosterina in September

On March 29th here on this site, we told the story of Nastya Kosterina, an 8 years old girl from Nizhny Novgorod Region. Nastya has a 4th degree scoliokyphosis and osteogenesis imperfecta. The spinal surgery at the Children's Hospital of Philadelphia in the US can save her life. The cost of the operation is $342,597.55. The Kosterin family will also need an additional $6,200 in support during their stay in the US. But the Kosterin family doesn’t have anywhere near this amount of money. We are happy to announce that the Russian Aid Foundation has stepped in to help and all the necessary funds have been raised. Individual donors from Russia, the US, Germany, Canada and other countries have contributed to cover Nastya and her mother’s accomodations, local transportation, food and other associated expenses in America. Nastya will be admitted to the hospital in September. Nastya’s family thanks everyone who has helped. Dear friends, please accept our gratitude as well.

Spinal surgery can save Nastya Kosterina

The cost of accommodations, food, transportation and other associated expenses for Nastya and her mother is $6,200. 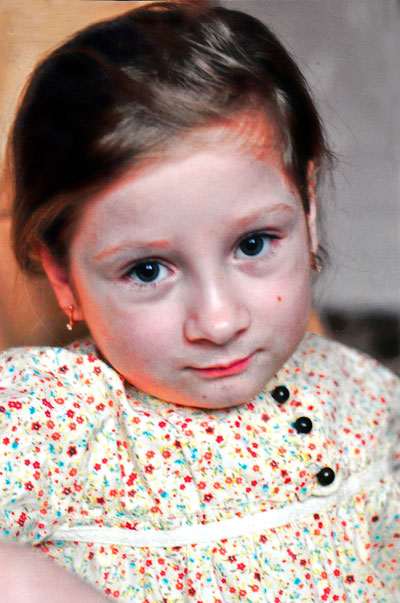 Nastya was born with osteogenesis imperfecta. It was not diagnosed right away. From age four she underwent treatment including pamidronate therapy at various Moscow hospitals. My daughter’s bones strengthened and stopped breaking. Last year, after surgery on her left foot she finally started to walk. But there is more misfortune: at the age of 18 months she was diagnosed with scoliosis. The curvature of her spine quickly became critical. Until Nastya started walking it was bearable but now that she is more active, it causes her much pain. Nastya always really wanted to go to school and now it was possible. But she cannot sit through all her classes – during each break I help her lie down to rest. The children like Nastya a lot, but she's embarrassed by her hump and tries to hide it under her clothes. Only spinal implant surgery can help our daughter. However, due to her main diagnosis this type of surgery is only available at a limited number of hospitals. The Children’s Hospital of Philadelphia in the US has agreed to accept Nastya. We're not able to cover the high cost of the surgery ourselves: my husband is an engineer, I take care of Nastya, and we receive Nastya's disability pension. Please, help us! Oksana Kosterina, Nizhny Novgorod Region.

Natalia Belova, Head of Pediatrics, European Medical Center (EMC), Moscow: “We have been treating Nastya for three years. Therapy for her main condition, osteogenesis imperfecta, was very successful. However, Nastya has developed severe scoliosis. Only surgery can help. It can be done in the US, at The Children’s Hospital of Philadelphia where all of the essential specialists are available: orthopedic surgeons, geneticists and specialists in osteogenesis imperfecta. After the surgery, Nastya will be able to move more actively and develop more adequately».

The cost of Nastya 's surgery is $342,597.55. The cost of accommodations, food, transportation and other associated expenses for Nastya and his mother is $6,200, but the family doesn't have such a large amount of money.

Dear friends! If you want to help Nastya please don't let the cost stop you. Your donation in any amount will be gratefully accepted. You can contribute to Rusfond USA using PayPal or by sending a check made payable to “Rusfond USA” and mailing it to Rusfond USA, 420 Lexington Avenue, Suite 300, New York, NY 10170. Thank you!